I thought I would do something different with this posting since my recent posts have been tomatoes, tomatoes, tomatoes. I thought I would do a tally of what I have harvested from my garden this calendar year. Several vegetables continued to grow into springtime from last fall's plantings, so to keep track of all of it, my spreadsheet data goes from January 1st to December 31st of each year. Expenditures come out of the value of the crops for each year. I don't carry expenses from year to year. That makes it too much like work, and for me that takes the fun out of the whole experience.

In my next post, I'll have some pics of the current harvests at that time. The last two or three weeks have been hectic here, leaving me no time to post my harvests. I apologize for that, as I am humbled by your visits to my blog.

I hope everyone gets some rain for their gardens and you have wonderful harvests!


The garden has been doing really great in the last few weeks! I've had to recruit helpers in order to keep up with the harvest rate. 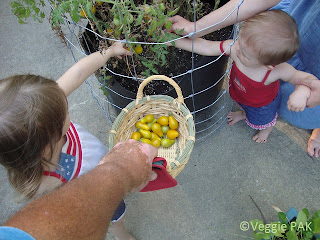 Celie and Eleanor help Poppa by picking the yellow pear (or balloon) tomatoes. 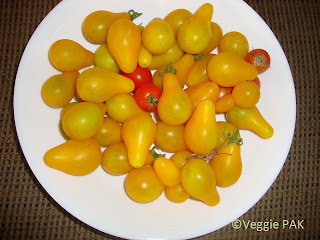 We picked 36 of these that weighed a total of 1 pound 1 ounce. There were also 18 tomato berries that weighed 4 ounces. (Not all were in this pic.) 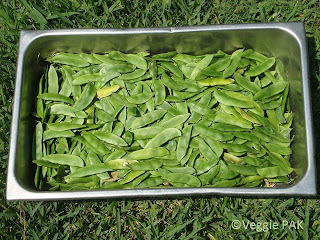 The butter beans weighed 6 pounds 7 ounces in the pods. 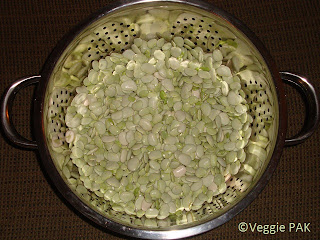 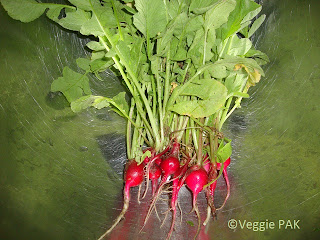 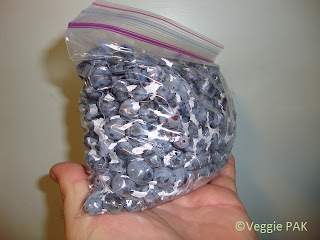 The blueberries continue to be a major delight in providing me with a full 1 pound harvest this week! 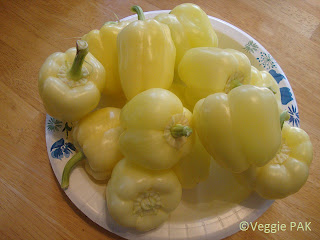 The golden Bell Peppers were harvested for the first time in my garden half-barrel. I picked 13 of them for 1  3/4 pounds. 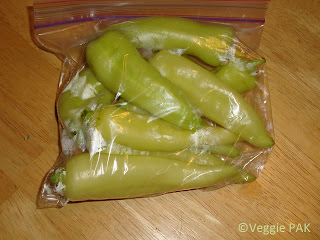 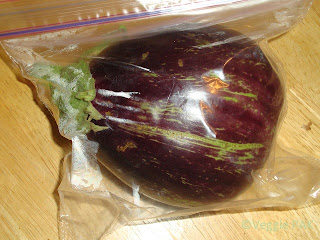 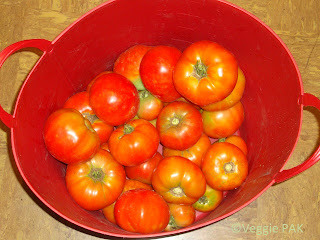 The Celebrity tomatoes gave us 17 1/4 pounds at this last picking. 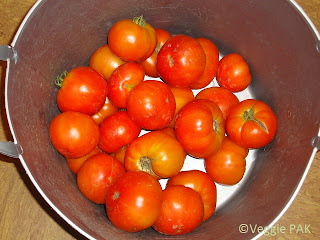 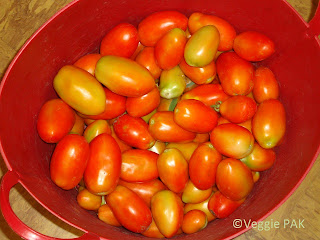 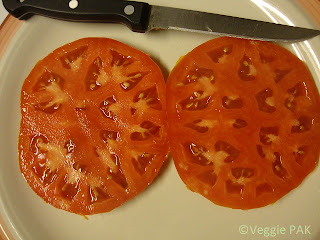 When I was making my wife's lunch and sliced this Park's Whopper tomato, I just knew I had to take a picture of it. They are on a dinner plate for size comparison purposes. 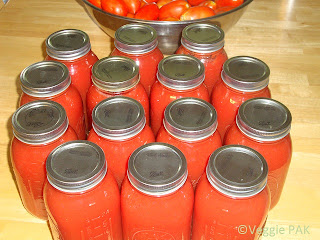 Here is my first batch of homemade organic tomato juice! Fourteen quarts! Needless to say, I am spending a lot of time in the kitchen putting up the veggies.

I thought I'd share a short video on the results of my gently squeezing the tomatoes before sending them through the food strainer. It really worked out great!

That completes another garden harvest report from Back Yard Organic Vegetables. I thank you for caring enough to visit my blog so I may share information with you on the successes as well as the failures of my gardening experiences.

Please forgive me, but I've been late on getting out my replies to comments that have been shared with me due to kitchen activity, but I will answer all within the next couple of days since it is raining again today.


The tomatoes are coming in pretty good this week, and even better than last week! I have two tubs of tomatoes from a few days ago in our kitchen waiting to be processed into canned goods. When contemplating cooking them and then having to run them through my hand food mill to remove the skins and seeds, the thought of it was just too much to bear! I searched until I found the right tool for the job. I bought a Back To Basics Food Strainer! 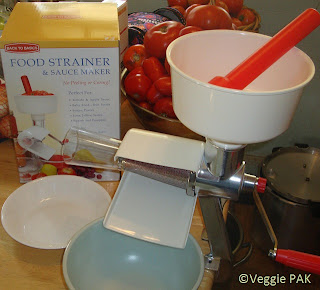 This was a little pricey at almost $60 I thought, but I very much needed it in order to process the tomatoes. When I took it out of the box I was immediately impressed with the construction of it. It has a strong metal body and a handle that is made from flat metal stock, which allows for easy turning that provides a lot of torque to the screw auger. 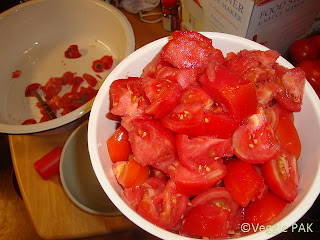 The strainer has a large hopper to receive the food product. I learned to not make it too full because I had to use the push stick to make the tomato chunks go into the auger. With it this full, a couple of chunks tried to escape the hopper. 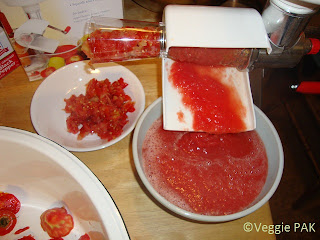 This is the first puree that came out of the strainer. There is not a single bit of seed in the receiving bowl! What looks like seeds is the reflection of the incandescent lights over the table. Look in the waste receiving bowl under the clear cone. That material is so dry that there is no juice in the bowl! This device is very thorough! 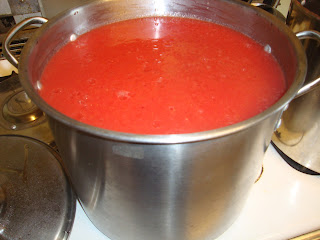 In only two hours time, I turned 45 pounds of tomatoes into 14 quarts of absolutely seedless tomato puree! 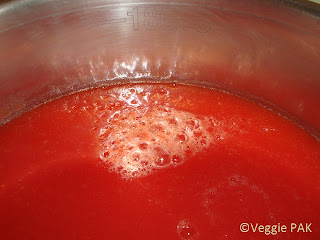 Fortunately for me, I have a large commercial-duty stainless steel stock pot that has the number of quarts marked on the inside of the pot. You can see the number "18" in the very top center of the picture, and the number "14" is partially submerged in the puree. Although this pot had those graduations marked, I needed something that suited my needs perfectly. We all know that a full canner load is 7 quarts. The lowest number of quarts marked in this pot was "10". So I remedied that. Before I started my cooking, I took the pot and poured 7 full-to-the-top quarts of water into it and let it settle while on a flat surface. When that was accomplished, I reached into the pot with a black crayon and slowly dipped it into the waterline at the side of the pot and slowly drew a short heavy line, about an inch long on the wall of the pot. This marked where 7 full quarts would be in this pot. Next, I poured the water out and dried the inside of the pot. Then I took my electric carbide-tipped engraver and duplicated the font and style of numbering and marked a "7" including the lines to the left and the right of the number on the inside of the pot. Now there is no more guesswork or wondering if there is enough product for a full canner load of 7 quarts! I was always perturbed when I was left with a 3/4 full quart jar after all that work. Not any more. 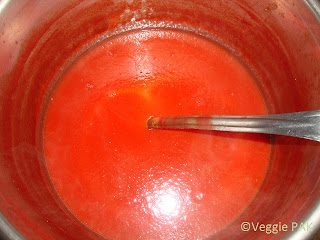 I had to cook this puree on a low heat over the course of two days to reduce it down from 14 to 7 quarts! (I let it cool in between and put it in the fridge overnight.) I should have remembered what I learned last year when working with tomatoes. After you cut out the stem part, turn it upside down and gently squeeze it and most of the clear liquid will come out, thereby requiring far less cooking time to reduce it down to 7 quarts. I'll remember that for the next batch.

I must say that this food strainer is one of the most incredible inventions for the kitchen I have ever seen as far as saving time goes. It's worth twice the price. 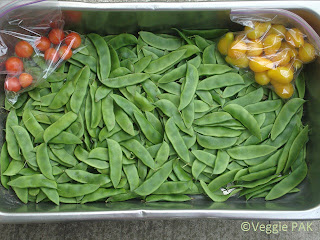 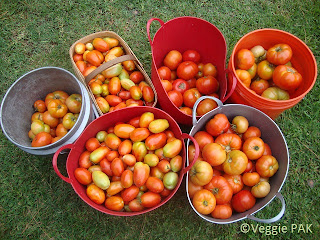 I picked tomatoes yesterday and did pretty well.  I'm not sure what's up with the tomato vines this year, but when you're reaching in to get one and you bump another, it doesn't take too much to knock it off the vine. Now when that happens, I'm sure to pick that one up and put it in the tub as well. Also, if they get too ripe before they're picked they'll spoil within a couple of days in the house. Fortunately for me, tomatoes continue to ripen after they've been picked. So this is how they look when I go picking. With a haul as large as this one, there's sure to be canned tomato juice in my future. 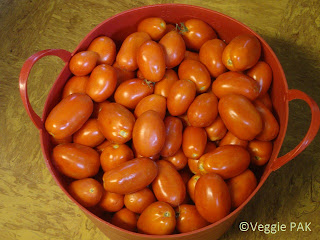 If you can see it in the previous picture, a lot of the Roma's seem to be getting half-red while the other half is still light green. If it's half red, I'm picking it rather than take a chance on it going bad before I get to it again. The Roma's in this picture used to look like the ones in the previous picture. In just a few days, they turned to this pretty tomato red. Many of these will go into a taco salad, while the rest will be made into juice. 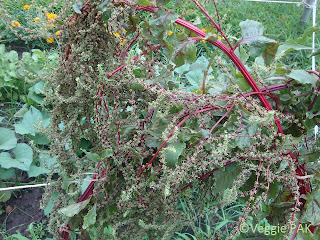 We haven't given up on the Swiss chard seeds, but they sure take a long time. At this rate, they'll still be occupying this garden space at the end of August! That's okay. Just look at the density of the seeds on those branches!

Happy Fourth of July to everyone! don't forget that this country was founded by individual citizens, not corporations. Stay informed and protect your rights!