Canning Some of the Harvest.


This is a short post on some of my canning activity. I had some time available so I made a batch of Sweet Banana Pepper Mustard using a recipe from the internet. It's the same recipe I've been using for a few years and it always turns out great. 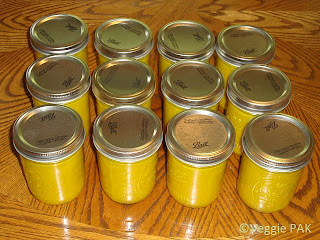 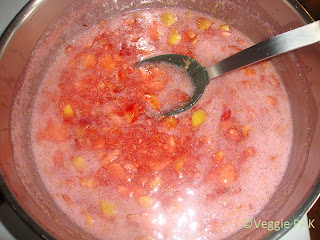 Here is a pot of boiling fig jam that I was cooking following another online recipe. This was just under three pounds of figs that I was able to accumulate over a few days time from my tree. Next year I'm hoping to have several more fig trees established to make acquiring a sufficient quantity of figs much quicker. I have one tree already planted and it has been growing all year. I have three more small ones in gallon containers that are coming along very nicely. 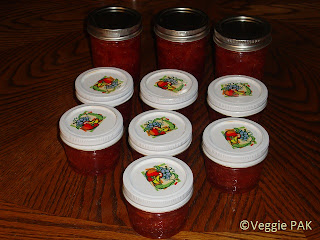 All that work provided me with three half-pints and seven jelly jars of wonderful fig jam. I repeated something that I had read about when I was making my peach preserves. I read that if you boil the mixture a little longer than the recipe calls for, somehow it makes the fruit not float to the top of the jars. It worked fine for the peaches and as you can see in the half-pint jars, it worked for the fig jam also.

That concludes this short canning post for today. Thanks for visiting and I hope each of you has a wonderful day!


First, let me apologize for not posting or replying to comments for the past few weeks, but the situation was out of my control. I don't know what Blogger did, but it stopped me from making any posts with pictures in them. I tried several workarounds suggested by online forums, but had no luck until I loaded a new web browser. That was suggested through an email from  blogger@googleproductforums.com. I loaded Firefox and was able to load my pictures into the draft blog post, and then I went back to Internet Explorer and edited the text. When I completed all that, reader's comments all the way back to August 16th popped into my blog all at once when I signed in. It was all very frustrating to say the least.


Now let's get to the Garden Review...

Labor Day has passed and the production from the hot weather crops has faded, so it's time to select the vegetables we like and to begin planting them in our garden as space allows. We're still anticipating some veggies from what remains growing in the garden. 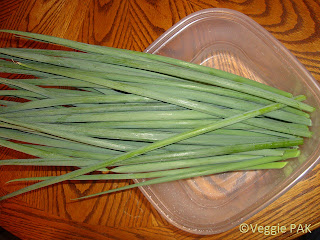 The green onions I planted two years ago in a container are still producing scallions for us. This bunch weighed 8 ounces. Since this picture was taken, I harvested another ten ounce bunch, and in the meantime they're ready to be picked again. 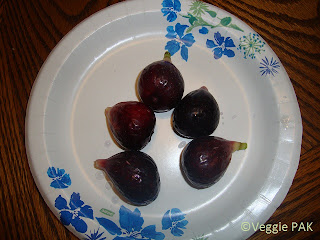 Here are some Brown Turkey figs that I picked from our tree. One tree doesn't produce a quantity of figs fast enough for a nice batch of fig preserves because it takes so many, so I made some refrigerator fig jam instead. 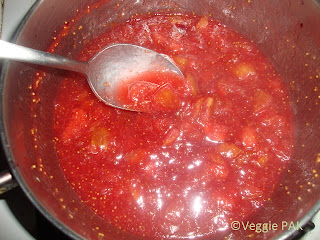 Without having to do the actual canning, it was pretty easy and didn't take long. I used just under three pounds of figs to make this batch. It's great on toast in the morning! 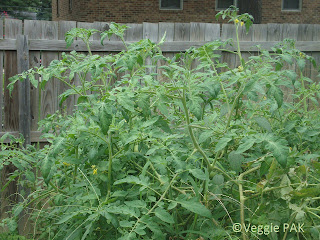 I surely thought my Park's Whopper tomatoes had produced all that they would for this year, but apparently I was mistaken. The vines are growing rapidly and there are blooms all over them. There are quite a few tomatoes on the vines that are already larger than the size of golf balls, with some as large as tennis balls. 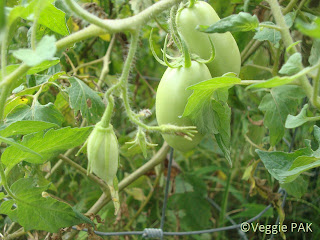 The Roma tomatoes are showing dramatic new growth and fruit as well. 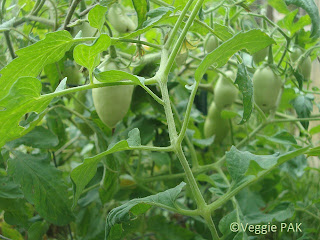 Their vines are loaded with tomatoes already! 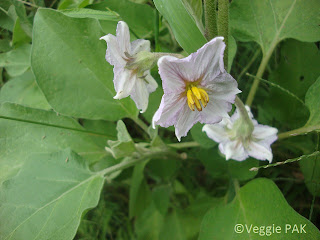 The six eggplant bushes that I planted have blooms all over them, but I've only gotten a few eggplants from them. Hopefully with the cooler weather, they will begin producing more. I think the hot weather we had affected the tomato production too. 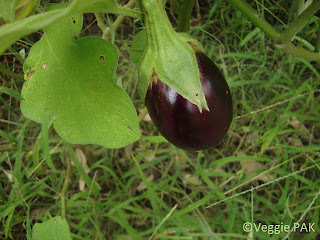 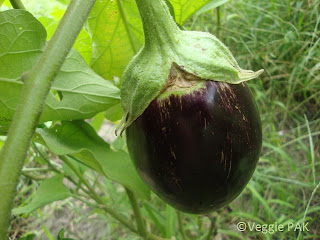 We are enjoying the eggplants that we do get. After peeling them, I slice them to a thickness of about 1/8 inch or less if I can cut them that thin, dip them in an egg bath, then coat them with "House of Autrey's Seafood Seasoning Mix" and fry them in vegetable oil until golden brown. Boy are they good! 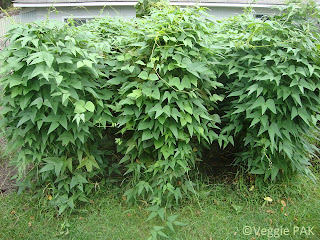 My Willow Leaf Pole Lima bean vines are doing very well. When I bought the seeds from Norfolk County Feed-n-Seed, they told me that this type makes a lot of vines. When the top vines can't stand up in the air any longer, they fall over and connect to the row next to them, even though the rows are three feet apart. That didn't concern me because I was very interested in the size of the beans they produced. They are a little bit smaller than the Henderson Baby Butter Beans that I had been planting for years. The pole beans had to do much better than the bush beans for me because I lost 3/4 of the bush bean crop every year to bugs and beans that I couldn't see, rotting on the ground. I would find that out when I pulled up the bushes and saw all the rotted bean pods. After that, I'm just not a bush bean fan, although I haven't ruled them out completely. I've been reading about people growing them in elevated rain gutters so they don't lay on the ground and rot. I might try that at some point. It would be interesting to see which method or bean type produced the greatest yield with the least labor. 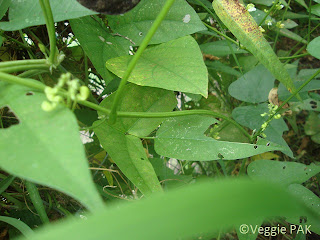 The vines are producing hundreds of flowers, so I'm anticipating another crop, also probably due to the cooler weather. They are blurry in the picture, but you can see the beans forming in the left side of it. 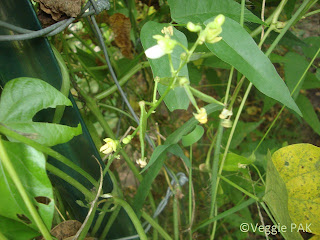 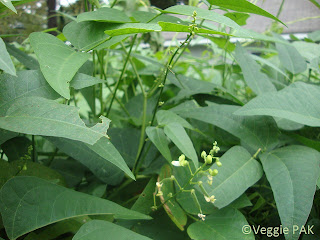 I'm looking forward to a lot more butter beans from these vines! 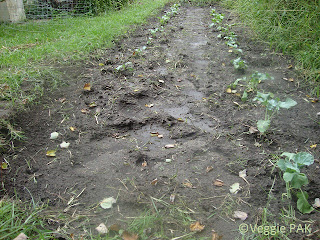 Here are two rows of Waltham 29 Broccoli that I planted on September 1st. Hopefully I'll get some broccoli before the new year.


I also have some very nice Vates collard plants that I'll be planting in the separator row between the Park's Whopper and Roma tomatoes.  This year we also bought some Kale plants for the garden. I've only planted those once before and had terrible problems with bugs. This year I'm prepared with some organic Bt powder.

In summary, I would be very happy to get some more nice red tomatoes, but I'm not holding my breath for that. I would be very happy with a good harvest of green tomatoes so I can make green tomato relish, which I think is incredibly delicious! If I can find a comparable lima bean with fewer vines, I might try them next year. I have planted my last beet seed. I simply cannot grow beets. I think the eggplant will do well and produce a satisfactory harvest. Next year I plan to plant a full row of them because we enjoy them so much. My grapes have all died after caring for them so meticulously for three years. The last vine produced so few clusters, that I let the birds have them and then I dug up that last vine.  I pulled out one row of posts for more yard access, and the other two rows of posts will be used as part of the frame for a small greenhouse, only about 7 x 13 feet in size. My plan for next year is to reduce the east plot size by just a few feet in length so that I can put in some dwarf apple trees. I already have a small fig tree that I rooted early in the spring from the original one that I have. It's about eighteen inches high and very healthy-looking. Additionally, I have three other fig clippings that are actively growing in a container. I plan on doing several more of those.

That concludes this blog post from Back Yard Organic Vegetables. I hope you found it interesting and informative, and I thank each of you for taking your time to visit with me here.

Have a great vegetable and fruit gardening day!
Veggie PAK