Harvests Have Slacked Off Dramatically, But There's Other Things To Be Done.


Since the harvests have about come to a close for our summer crops, we started to plan for our Fall Garden. We also took advantage of the availability of  some beautiful Georgia freestone peaches at one of our preferred local family farm stands. 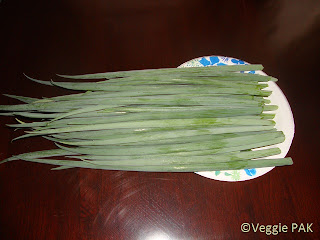 I did get a small 8 ounce harvest of scallions from the store-bought onions that I planted over two winters ago. They're still producing beautiful scallions for us.


I don't have pictures of the rest of the harvests, but I will list them.

My fig tree is producing figs at a somewhat slow rate, but I'll take them however I can get them. In the past ten or so days, I have been able to pick 24 figs that weighed a total of 1.24 pounds.

There were four yellow pear tomatoes that together weighed one ounce.

We got three small roma tomatoes at 9 ounces, five Park's Whopper tomatoes at 1.5 pounds, and four celebrity tomatoes for a total of 1 pound.

Finally, the raspberries haven't been producing as much as I had hoped. We only picked 5.75 ounces. 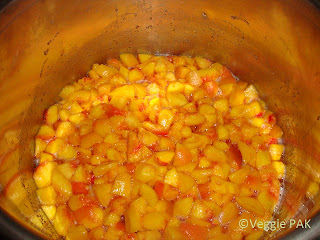 We bought sixteen pounds of Georgia freestone peaches so I could make my wife's favorite spread: Peach Preserves!

I used the recipe from Cooks.com for my Peach Preserves. Even though peaches are a high acid food, to help ensure that I wouldn't lose any due to spoilage, I added bottled lemon juice at the rate called for in the Ball Blue Book.

You can see the numbers on the inside of the stock pot that indicate that there was less than ten quarts of peaches in the pot. That's still a lot of peaches! My experience with canning and resulting floating fruit prompted me to use my own judgement on the length of time I cooked this mixture. I brought up the temperature slowly by simmering it in my heavy 18 quart stainless steel stock pot on low heat for about an hour or so. When the outside of the stock pot got so hot that I couldn't keep my hand on the sidewall of it, I turned up the heat to high in order to produce a hard boil that couldn't be stirred away. I stirred this constantly at a hard boil for a full thirty minutes. 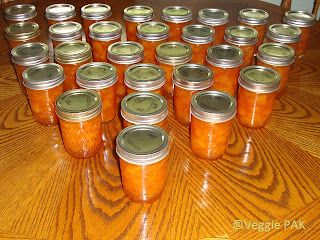 The end result was 30 half-pint jars of delicious and beautiful peach preserves that didn't float to the top of the jars. 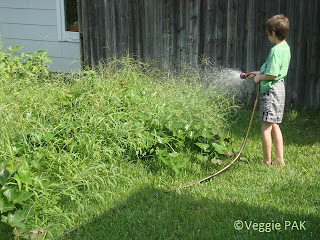 Our grandson Noah spend the night at our house and he always wants to help in the garden, so I let him water the sweet potatoes for me. The patch of sweet potatoes appears to be rather unkept. Before the weeds got as high as you see them, the potato vines completely filled the area so that there was no room to step into the patch without stepping on the vines. I didn't want to do that, so I just let them be. Now I don't know if I did a good thing or a bad thing, because since then I have read that you should keep moving the vines so the strength of the plant will be at the main root. Otherwise, the vines may root and you might end up with very small sweet potatoes all around! We'll find out in the fall when the vines and leaves turn yellow. For now, I'm just keeping my fingers crossed!

That's what we've been doing around here for the last couple of weeks. There hasn't really been much to post about with the way the harvests have dropped off this time of year for us.

I hope everyone has been having a wonderful summer garden experience this year!


This is just a short post on canning homemade jam.

Over a three day period, I collected three pounds of figs from my tree in our back yard. I love figs, so I decided to try making some homemade fig jam. Of all the canning that I have done, I think this was the easiest to do correctly.

I used the recipe "How To Make Homemade Fig Jam - Easily!" which I found at PickYourOwn.org. 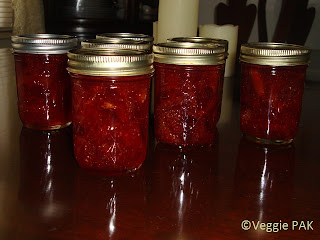 When I was through, I had seven half-pints of delicious fig jam, plus a little more that went into the refrigerator!

The fig tree still has dozens of figs in various stages of development, so I will surely be making more, and if I get enough figs before the ants do, I'll make fig preserves.

That's all for now. It was a short post, wasn't it?

I would like to wish my mom a Happy Birthday today as she turns 89 years young. She still has her own vegetable and flower garden, and she is active in her gardening club.

Happy Birthday Mom! I love you!

I hope everyone is having a great gardening day!
Veggie PAK