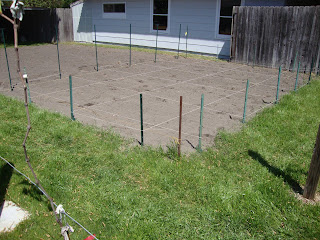 In the last few years, I tried to take care of my weeding work by simply hoeing the soil in the garden. If you've ever tried that, you know it's backbreaking work that never ends. This year, I planned the spacing in my garden a little differently so I can use my tiller to do the hard part very effectively. Instead of having my plants and rows close together, I spaced them further apart in order to have room for my tiller to go between the plants and rows. I measured off and planted my individual tomato plants and the rows in a grid pattern, four feet on center each way, having laid out the positions using dry lines. That would give me the clearance on each side of my tiller so I wouldn't damage the roots of the vegetable plants. 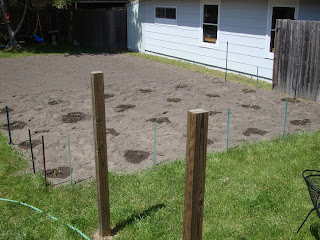 I admit that when I had just put the tomato plants in the ground on April 18th, they looked lost in the soil because they were so far apart. But thankfully, they didn't look like that for long. Using organic fertilizer on a monthly basis and watering them frequently really helped them to grow fast. I think watering the individual plants when they were small instead of watering the entire garden area helped keep the weeds down in between the rows and plants for a while. But, I knew that watering practice would have to change as the tomato plants grew. 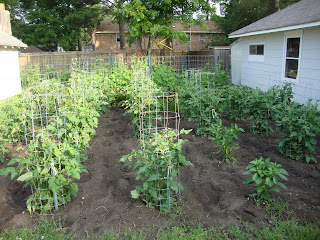 Here are my tomato plants on June 3rd with the home-made cages around them. I had tilled around them on June 2nd. I generally till around and between the plants when the weeds get to be 3 or 4 inches high. I have noticed that there are fewer weeds coming back between tillings. 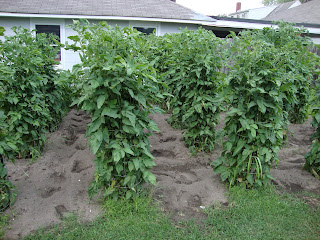 Just 22 days later, these are my tomato plants on June 25th after tilling between the plants and rows. The tilling really does a thorough job of getting rid of the weeds. This time, the time between tilling was 23 days! I think that's a great success in weed control! Another major weeding part the tiller plays is that the weeds don't get a chance to go to seed. That prevents thousands of weed seeds from being introduced into your garden! As for the weeds inside the tomato cages, when they grow enough to stick out of the cage, I just walk through and pull them out as I go. With the soil loosened around the outside of the cages, the weeds come up very easily, roots and all. 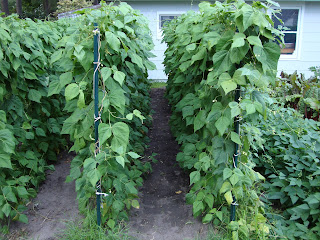 Here are my Fortex Snap Beans from Johnny's Selected Seeds with the rows spaced 36 inches apart. I have found the Fortex beans to be absolutely stringless, just as they are advertised! That was a big deal to me. I also use the tiller for weed control between these rows. You can see how effective it is. I have done this a few times this year for the bean rows, and as you can see, it doesn't hurt the beans at all. And I do the same thing as I do with the tomato cage weeds when the weeds are big enough to grab. I just pull out the weeds that are in the row, roots and all.

For the last two years, I have had a terrible problem with Mexican Bean Beetles. In two of the rows of beans, I also planted Yukon Gold potatoes. The theory is that the potatoes will help protect the beans from the Mexican bean beetles, and the beans will help protect the potatoes from the Colorado Potato Beetles. We'll see how they do. I expect a slight impact on both beetle populations, but not actual control to the point of hardly seeing any beetles at all. 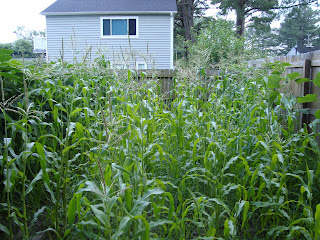 Here is my Whiteout brand corn, also from Johnny's Selected Seeds. The ears are making up pretty good right now, so I'm keeping the corn thoroughly watered. You can notice from the position I was in when I took the picture, that the corn closest to me is a little shorter. That's because behind me is a large maple tree. The shade really negatively affects crop production! The shorter corn only gets midday to late afternoon sun, while the rest gets all day sunlight. It makes a big difference in the appearance of the plants, and consequently the crop yield. 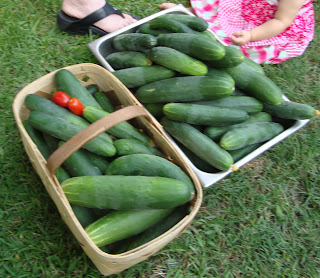 Here are 71 cucumbers that Noah (my 5 year old Grandson) and I picked on June 23rd. After we picked them, we watered the cucumber row heavily enough to where water was standing between the rows of vegetables. Noah has been helping me in the vegetable garden since he was three years old. 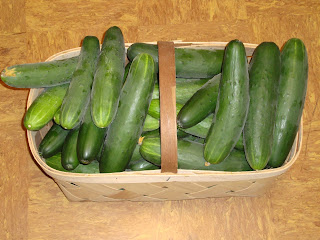 The next day, to our amazement, we went out and picked 35 more cucumbers from the row we had picked clean yesterday. 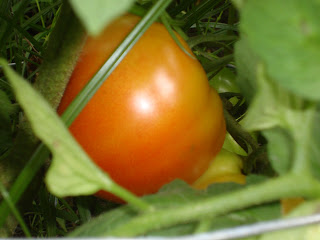 While we were picking the cucumbers the other day, we noticed two hidden red tomatoes, so we picked them as well. You can see them in the previous picture of the basket of cucumbers. They were supposed to be Park's Whoppers, but turned out to be Romas, which is fine with me. The point here is that these were the only tomatoes that were red or even turning red at the time. The day after we picked the two Romas, this is what we saw. These Park's Whopper tomatoes turned red in one night! There will be a flood of tomatoes coming in during the next week or so! 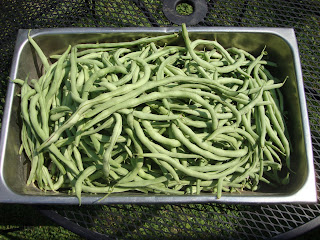 Here is a picture of the 10 pounds of Fortex snap beans we picked. Notice how long the beans are! This is the best tasting virtually stringless snap bean that I have found. I canned several quarts of them last year, and plan on doing the same or even more this year. I highly recommend them to vegetable gardeners!

Noah and his two year old sister Keira, planted my red onion seeds in flats on my kitchen table while I taped it! They had a great time, but better than that, they were learning about gardening. They are gaining organic gardening knowledge, and they remember it! I want them to know how to grow some of their own food organically. Them helping me is another reason why I am strictly organic. To hear Noah laughing as he ran through my corn when he was three with the leaves swishing against him is priceless. He was having pure fun! That fun continues. I will always be an organic vegetable gardener!

Veggie PAK
Posted by Veggie PAK at 7:38 AM