I Just Couldn't Wait "Till" Spring!

Today's temps are supposed to reach the high 40's. I hope they're right! I want to go out there in the garden so badly that I almost can't stand it.

In a previous post, I showed my container vegetables and herbs that I brought in and put upstairs in my summer kitchen. For the most part, they are holding their own, some even growing to the point of being suitable for harvest.  There is insufficient lighting from the small window that faces west, so I'll have to set up my lights to boost their growth. 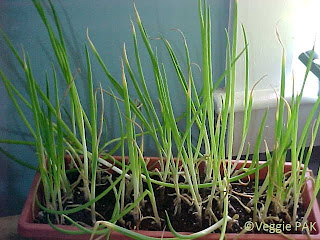 The green onions are growing, although they are a little lighter green than usual. I'm hoping that setting up the lighting will cure that. I might just go ahead and harvest them next week. They would sure taste good in a dip. 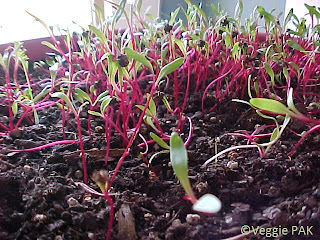 The ruby red swiss chard is getting leggy, so I'm actually thinking about planting them outside in the garden and covering them with plastic to protect them until they get a little larger, then just removing the plastic altogether. 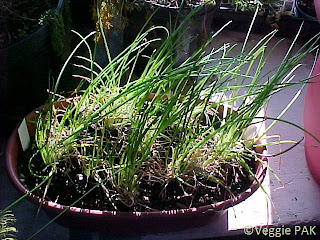 The chives have grown nicely while inside.  There's enough for a small harvest already. 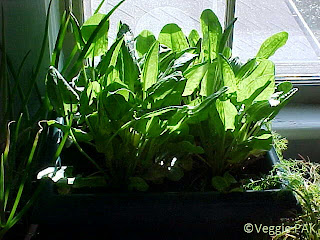 The sorrell seems to be the happiest of the plants inside. It is filling out very well. 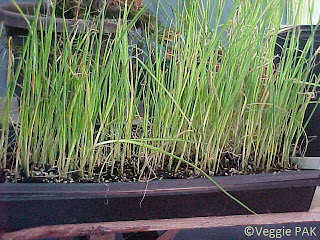 Remember the leeks that I planted in the flat on August 26th? Well, here they are! They may have grown an inch since I brought them in, but it's hard to tell. I must admit that they are durable, as they're still living in this flat after being frozen and snowed on three times. The ones that I had taken out and planted in the garden didn't appear to grow at all. 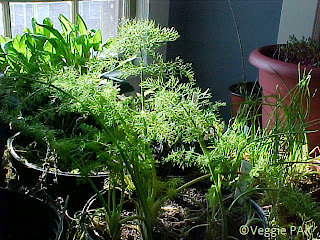 The fennel seems to be surviving, but if it's growing at all, I can't tell. At least it's not dead. After the last frost of the year, I'll be planting it outside for the butterflies. The dill doesn't look like it's going to make it. There's a 3/8 inch sprout on it and I have it in the sunshine, so maybe it will survive. We'll have to wait and see. 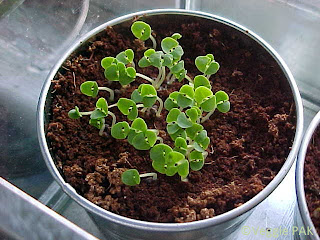 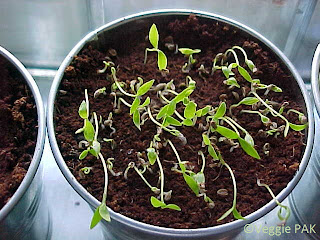 as did the Parsley... 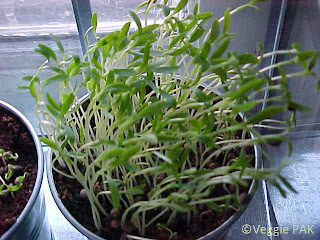 and the Cilantro. You can really see how they have been reaching for the sunlight.

NOW FOR THE FUN! 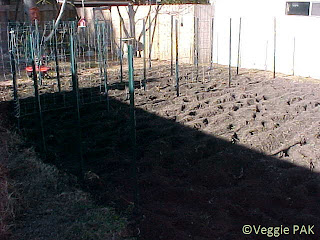 Friday the temps hit 50 degrees! That was all I needed to break out the tiller and give the garden a good going over! I'm getting my additional fence fabric ready for the new crops after the last frost is gone. Which, by the way, concerns me, given the winter everyone is having. I think there's a very good possibility that a late last frost might sneak in and surprise us.

The tiller did just as I expected near the fencing. I was able to steer the tines under the fencing and then around the posts from both sides, and it worked perfectly. This was just the first tilling to break up the soil. I plan on heavily applying compost under the bean fencing, and then thoroughly tilling it in before I plant the beans. According to the material I've read, that is supposed to alleviate the need for crop rotation in a small garden, as it introduces micro-organisms, minerals and all the other good things that compost provides for the garden. Doing  it this way saves me from having to remove all the fence fabric and pulling the posts and resetting them all in a different spot. I can really only move them a few feet. 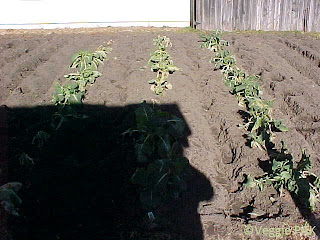 The Brussels sprouts and broccoli in the east field are still looking poorly. I'm leaving them in until I'm actually ready for spring planting. Then, out they come, bearing or not. You can hardly see it, but the swiss chard is still there to the right in the picture. 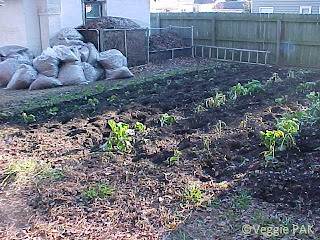 The collards, Brussels sprouts and broccoli in the west field are in rough shape. This is the first year that I haven't been picking collards through the winter. It's just been too cold for them to grow. In the green strip between the bags of leaves and the brown soil is a row of swiss chard that is really trying to grow. The leaves might only be 3/4 inch long, but with the time we have left until spring planting, I'll let them stay and maybe I can harvest some nice leaves later on. When we get a week of 50 degree weather, they'll jump up quickly.

Today is Saturday, the day after my tilling. Boy, am I glad that I got to till yesterday. Today's high temp was 23 degrees! What a change!

I hope spring gets here soon.

Have a great vegetable gardening day!
Veggie PAK
Posted by Veggie PAK at 7:26 AM