Last week the weather was pretty cold here so I didn't have a report put together for sharing with you on Monday. The temperatures of the last two nights of the week was 28 degrees and then 26 degrees. Pretty chilly for the plants, but it seems like they were not damaged. 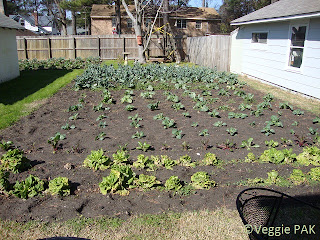 The garden is looking pretty good for February! This is today's view of my east plot. 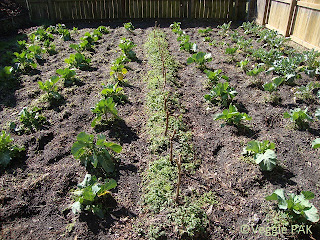 This is a view of my west plot. As you can see, I didn't do additional work on the giant marconi pepper stalks to prepare them for the winter temperatures. It's been so mild for the vast majority of this winter that I felt it was unnecessary to do anything else for them. Maybe the weeds that grew up alongside will help protect them from the cold. The stalks are very dry so I leave them alone. If they sprout new growth, it would be great. Perhaps new growth may come from the base of the stalks and not the stalks themselves. The stalks may actually be dead, but I'm hoping that the roots are still alive. 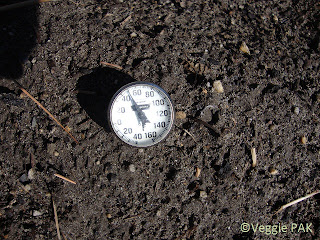 I checked the soil temperature to see if it was warming up for seed planting. After four full minutes in the ground, the probe thermometer only rose to 48 degrees. The cooperative extension publications basically say that anything planted before the ground reaches and maintains a steady 60 degrees is just wasting seed because it will rot. At least for the non-cool-weather crops anyway. Using that line of thinking worked well for me last year, so I'm sticking with it for this year too. The air temp today was only 42 degrees, so that could be a contributing factor to the low soil temperature. Daytime temps this week are supposed to be in the mid-50's all week. I hope so. 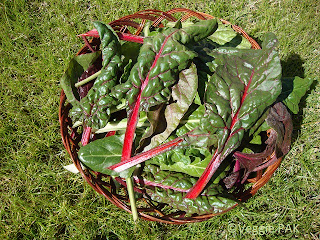 I picked 15 ounces of rainbow Swiss chard this week. It's really starting to sprout! 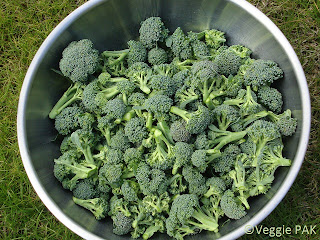 I harvested three pounds of broccoli this week! After fertilizing the garden and watering it in, then we had rain.  Now there are several dozen dime-sized florets throughout the garden. Hopefully I'll be picking them for the next Harvest Monday! 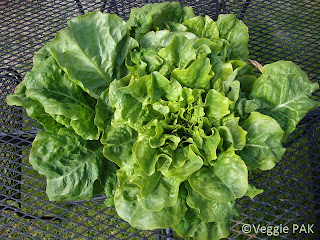 During the last two weeks I picked two pounds of buttercrunch lettuce for salads and sandwiches. This picture is of the full pound that was picked just this week.

Be sure to visit DaphnesDandelions for more exciting vegetable gardening experiences in a northern growing zone.

That concludes another Harvest Monday report from our garden. I hope no one is having too much trouble in their gardens with cold temperatures. Spring is right around the corner!

Have a great vegetable gardening day, and thanks for visiting!
Veggie PAK
Posted by Veggie PAK at 9:19 PM