There wasn't too much of a harvest today, but I'm thankful for the small things. 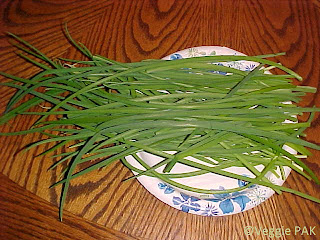 The first harvest was five ounces of scallions that sprouted from the green onion bulbs that I had planted in a container, as suggested by my mom, after using the orginal scallions from them early in the summer. These bulbs have produced several harvests of delicious scallions for use in cooking and making dips. 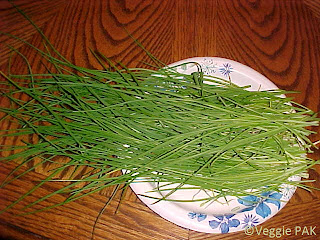 The second harvest was four ounces of chives. I am surprised that both scallions and the chives grew so well upstairs in the house during this time.

That makes a total of nine ounces for the year so far. Right now in the garden, it looks like the broccoli might be trying to develop actual stalks. The Brussels sprouts are still looking very sad. They might still snap out of it and produce a few sprouts. 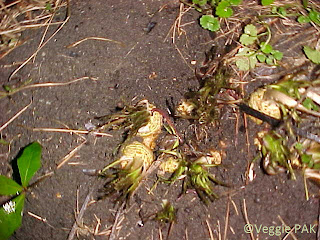 I found something today that I was happy to see. The above pic shows the cream-colored, two-year-old horseradish crowns that are ready to harvest! Look at the size of them! These root crowns are from a group of plants that were over four feet high.  I'll be digging them up in the next couple of weeks in preparation for making some fresh, delicious horseradish sauce.

By the way, I haven't forgotten about doing a post on the evolution of the design of my composting area. I've been retrieving pics from two older computers (using Win 95 and 98) using floppy disks, and that's a chore to be sure. I'll be posting the information in the next couple of weeks to share it with you.

Thanks for visiting my blog and sharing a comment when it strikes you. I enjoy the dialogue.