Our harvest for this week included the seed saving results for Waltham 29 broccoli and  also the chives in addition to our vegetables.

It took much longer than I thought it would to dry out those broccoli seed pods you see in the two containers below. 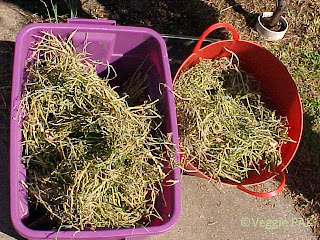 I brought the containers inside at night, and took them back out into the sunshine in the morning for about ten days straight, turning the contents several times each day. Finally it was time to remove the seeds from those pods.

Most of the materials I have read about extracting the seed from the pods recommended that you take a mallet of some sort and crush the pods. Even if the mallet was hard rubber, you still run a high risk of damaging a lot of the seeds depending upon the surface you were crushing them against. I found such a procedure to be unnecessary. I simply took a handful of seed pods at a time and thoroughly crushed them in my hands while holding them over a large tub to catch the debris. This wasn't the tedious part though.

Separating the seed from the chaff was a difficult task. As with the Brussels sprouts seeds, I first used a 1/4 inch mesh screen and then I used a finer mesh screen. After that wasn't very successful, I used a metal kitchen colander since the holes were smaller than those a plastic one has. I did that 7 or 8 times, and while it helped remove some, it left a lot of chaff still in with the seeds.

The last method I used was to take a long stainless steel steam line tray and tilt it on the length at about a 30 degree angle in front of a fan. All the seeds and chaff were in the tray at the low end. I took small handfuls of it and held it up at the low end of the tray about 4 or 5 inches high, or whatever worked best for the air movement. I gradually released a little at a time at that height and the fan caused the air to catch the chaff and blow it up and over the end of the tray onto the shop floor. While the air caught the material and blew a lot of the chaff away, the incline of the tray allowed the heavier seeds to drop onto the high end of the tray and slide back to the bottom so they weren't lost. I did this many times, judging the need by the amount of chaff left in with the seeds after each time. I know we all want good seeds, and I noticed that along with the chaff, some tiny seeds were also being blown out. The way I see it, they were immature seeds that wouldn't have produced good plants, so their removal wasn't a loss. 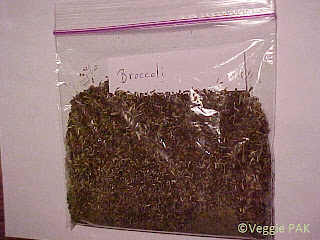 I ended up with 6 3/4 ounces of organic Waltham 29 broccoli seeds that can be stored for 5 years. I plan to divide them up and store them in small mylar bags with oxygen absorbers to extend their shelf life even further. 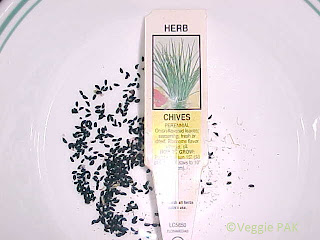 My chives bloomed recently. I noticed that the flower heads were now looking dull so I decided to see if I could capture some of the seeds from them and it worked. Now I'll have plenty for next year.

We picked 1.75 pounds of Ruby Red Swiss chard that grew from the seed my grandaughter Celie planted in the container in our kitchen on December 30th, 2010. There were 156 transplants and this harvest represents only a very small number of them. The video of her planting the seed is provided below so folks won't have to go look for it if they want to see it.

Celie is a sweetie! 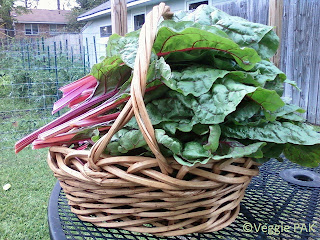 After they germinated, I transplanted those seedlings to the garden and they did very well.

This is the first harvest from the first seeds that Celie planted in her little two year old beautiful life. 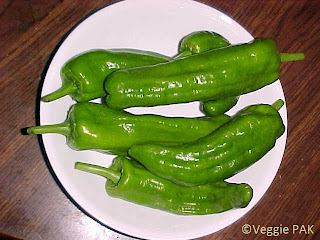 The Giant Marconi peppers weighed 1.63 pounds. There are several buds and flowers on all of the plants and I didn't want to inhibit their growth so I picked these Sunday.

That's all for this week's harvest info. I hope everyone is enjoying beautiful gardening weather!

Thanks for visiting.
Veggie PAK