Mix three pounds of ground venison or beef, two pounds ground pork, two cups uncooked brown rice (the boil in a bag type), and a large Vidalia onion. [Using 73/27 beef will require removal of some of the liquid halfway through the cooking process. I (Veggie PAK) prefer 93/7 beef for this recipe. Then no draining is necessary.]

Chop the onion as small as you prefer, but remember that they should be small enough to allow the wrapping process without an onion chunk sticking through the soft Swiss chard leaf.

After you get the meat all set (the type you like) then add Adobo seasoning generously, about a half a teaspoon of black pepper, salt to taste, and any other spice you may like. This is a basic recipe but you can experiment with all sorts of variations.

Add one large egg and I like about half a cup or so of honey hickory barbeque sauce. That gives it a terrific flavor! Mix all these ingredients thoroughly, then get ready for the leaves. 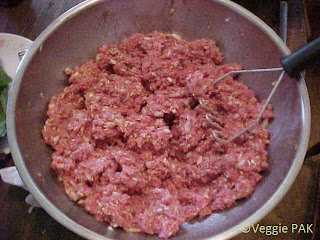 Take about 30 or so medium to large Swiss chard leaves and wash them well under cold running water to get rid of any grit and the occasional bug. Cut off the extra stalk length where it meets the leaf. (those cut-off stalks are not used in this recipe.) 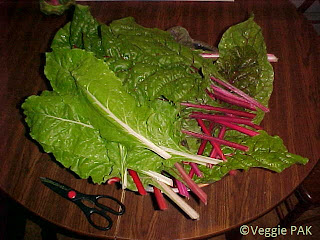 Then lay the leaf flat (on a plate or cutting board) and upside down, and with a paring knife slice off some of the thick stem by carefully pulling the knife towards yourself. The knife will have a tendency to go downwards and cut through the stem portion of the leaf. If you do it going away from yourself, you will probably slice through the leaf and ruin it for this recipe. You don't have to take the whole thick part off, just enough to make it pliable when heated. I prefer to take about half the thickness off to suit my own personal taste. Swiss chard gets VERY pliable, unlike cabbage which stays quite stiff. (You can see where I sliced through the stem of this one but didn't rip the leaf.) 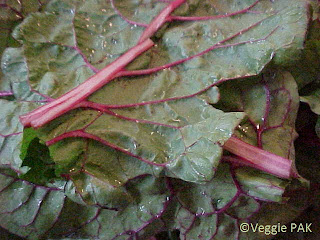 Once the stem is thinned down, I put about 6 to 8 leaves in a large pot of boiling water and blanch them for about 30 to 45 seconds. They get limp very fast and are so easy to use.


(Veggie PAK Hint: Before I blanch the leaves, I stack them in the same direction directly on top of each other. That way, when you go to take them out, you can use tongs to grab the entire bunch at once by the thick end of the leaves and remove them from the water. Have a large flat plate on the stovetop (not on a burner) next to the pot in order to receive the leaves. Once I have the leaves in the tongs and let them drip off for a few seconds, then while over the plate and holding the tongs with the hot leaves in them, I make a quick upward motion and quickly come straight down so the leaves will be flat on the plate and scoot the bottom of the tongs out from under the leaves. The leaves will catch air and flatten out on the plate doing it this way. Much like a parachute. This makes it tremendously easier to roll the leaves. Bunched up soft leaves are almost impossible to pick out one at a time without ripping them up as they stick together because they're wet. I take the leaves one at a time and spread them out on a "folding plate" where I put the meat on and roll them up. You don't want to try to roll them up while stacked because they will get tangled and rip.)

After they all have been blanched, take one leaf at a time and turn it upside down, put a nice sized meatball on the base of the stem and roll it up a couple of inches, then fold the sides in and finish rolling it up. It's SO much easier than cabbage or romaine lettuce. The taste is delicious! You can see in the pic where I put the meatball in on the right and I fold the leaves over as you see, then just roll it up going to the left in the pic. 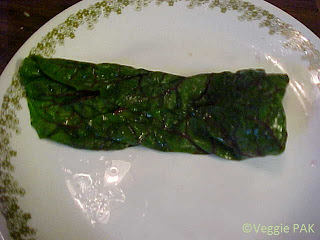 I prefer to cook mine uncovered in an aluminum cooking pan (about 10" by 10" available from the grocery store) at 400 degrees for 40 minutes. (Veggie PAK used a Corning Ware container.) 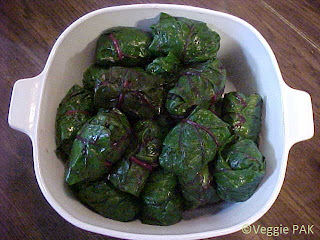 Here's an up-close look if it will help. 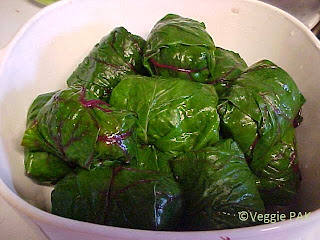 I think the ruby red leaves taste much better than the plain green leaves, but you can decide that for yourself when you try this recipe. (Veggie PAK used both kinds because that's what I had available.)
The chard turns to a little darker flat colored green when it cooks. I would have taken some pics of it, but I began sampling it instead!

I hope you like this recipe, but you can modify it to suit your personal preferences on spices and sauce.

Have a wonderful cooking day with the veggies you grow in your own garden!

Thanks for stopping by.
Veggie PAK
Posted by Veggie PAK at 8:48 AM