This year I am growing okra for the first time. I think fried okra is great, but now that I'm growing some I expect to find many more recipes for it that we will enjoy. At the end of this post, I have included some additional status on other plants as well. 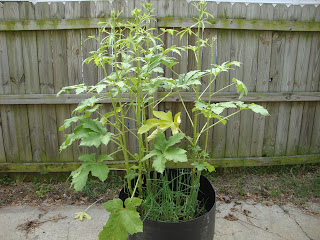 This is the half-barrel I use for growing my okra plants. If they were not in this barrel, they would be dead from Hurricane Irene's high winds. I rolled them into my shop for protection, and as you can see by their condition, that worked perfectly! In addition to the okra, you can see the Egyptian walking onions (courtesy of Frank)  that I have planted in the same container. Since the remainder of the growing season is short this year, I'm using those for scallions for dips right now. In the spring, I'll replant the onions in the ground.

I have read that okra produces seed in the second year of its growth. I'm planning on keeping these plants stored inside through the winter and when spring arrives, I'll bring them back out during the day. Then every night I'll bring them in to protect them from frost until that risk passes. It should be very interesting to see how they produce next year. Hopefully, I'll harvest some seeds. With the roots and stalks intact, I anticipate a bountiful harvest, but only time will tell. 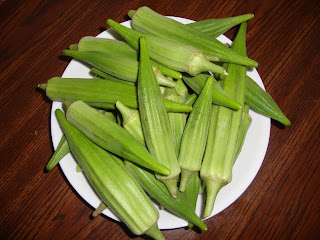 Here are some of the 60 pieces of okra I've harvested this year weighing a total of 2.6 pounds. I have to pick them every couple of days due to their current growth rate. However, I believe they are getting ready to surge ahead with additional points of harvesting.

As you can see from the following pics, the okra is still vigorously being produced at the tops of the plants. 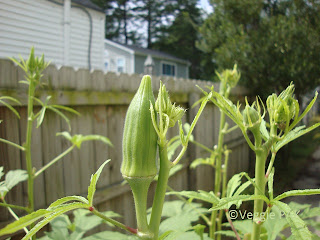 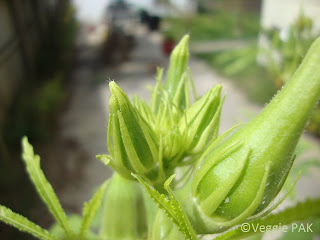 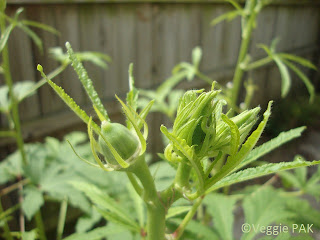 The plants are now developing new shoots that are bearing their own okra farther down the length of the main stalks. 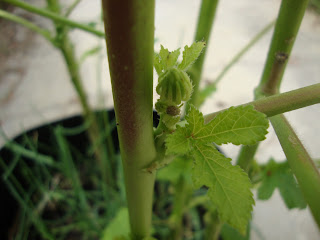 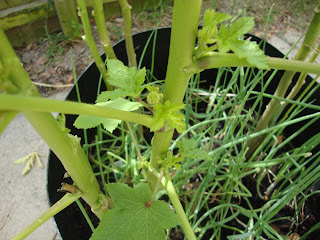 The end result should be plenty of okra for use in whatever recipes I decide to try out. Overall, I would say the okra is a big success for this year. 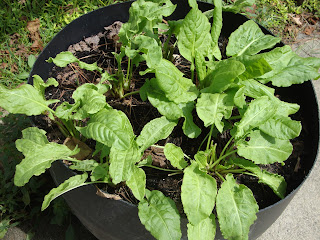 After the recent 1  1/2 pound harvest of Sorrel reduced the foliage down to the nubs, it's growing again nicely. 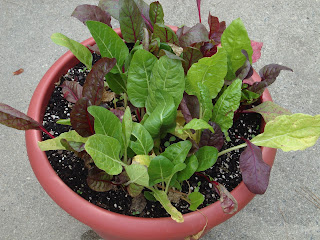 I found some Swiss chard plants at the feed-n-seed so I bought them and replanted them into a large container. During the hardest part of the coming winter, they will be stored inside my shop for protection. 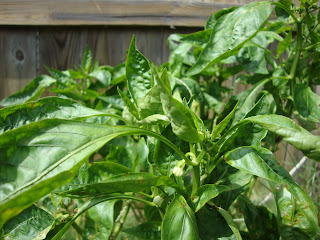 This is my California Wonder bell pepper plant. It only produced 4 very small peppers that when combined wouldn't even amount to the size of a large banana pepper. For some unknown reason, I cannot successfully grow bell peppers in my soil. You can enlarge the picture and see the blooms and little nubs that will not develop into nice peppers. I'm going to try to keep it protected in place through the winter and see what it will do next year. After the leaves drop, I'll heavily mulch the base and wrap it in burlap for some protection. 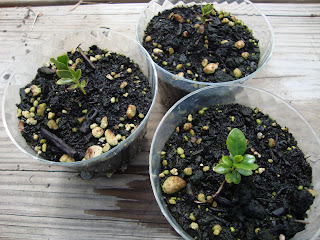 These are the three remaining Chuck Hayes Gardenias that I grew from seeds that were in a pod on a gardenia in our front yard. There were about 30 seeds in the pod, and initially only nine germinated in early summer. Slowly they dwindled down to these three, and one is looking a bit poorly. Don't know if that one will make it. It was fun trying though! They have a wonderful scent when they bloom. They're one of my wife's favorites, if not THE favorite! 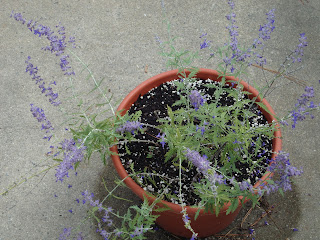 This is the Russian Sage that my mom sent last year from Hudson, New York. As most of the flowers are gone from the garden now, the honey bees and bumble bees take advantage of having this one still blooming. As luck would have it, there are no bees in this picture. Last spring, this plant was just a single brown stick in the pot, but it's doing very well now. I need to store it properly this winter so we and the bees will enjoy it next year as well.

That concludes this last post of my "summer" garden info for 2011. I hope you found it interesting and informative. I'm always open to suggestions on how to increase the yield from my garden. That's what it's all about. Growing our own food. If you have suggestions that would benefit my harvests, please feel free to share an email with me at veggiegardenblogger@gmail.com .

Watch for my next post which will be "My First Fall Garden Report For 2011."

Have a wonderful and safe vegetable gardening day!
Veggie PAK