It's Time For Another Fall Harvest Monday & Other Garden Info.

The summer crops are almost gone now with the exception of some Park's Whopper tomatoes that are still producing and also the good ol' raspberries. 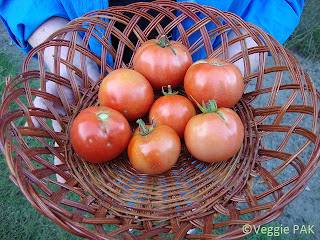 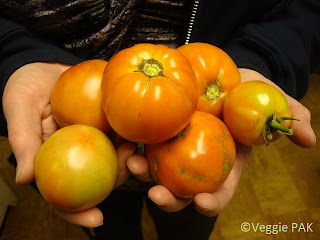 We got two pickings this week for a total of 13 tomatoes that weighed in at two pounds, twelve ounces. Not a bad harvest for tomatoes in the middle of October.

I don't have raspberry pics today, but this week I picked six ounces of plump raspberries.

I got just one piece of okra that weighed one and a half ounces. They're about done for the season as the leaves are falling off and not being replaced with many new ones.


The giant marconi pepppers are also on the wane, but that's to be expected this time of year. I was able to have my laborer pick three okay-sized peppers this week.


All my grandkids love to help their Poppa in the garden and I'm so thankful for that! They're our hope for the future.

Fall is also applesauce time. I bought a bushel of stayman apples to make our applesauce with. I hadn't tried them before, but they were highly recommended by the farmer I bought them from. She was right! This is my new choice of apple for making applesauce with no added sugar.  It's delicious! 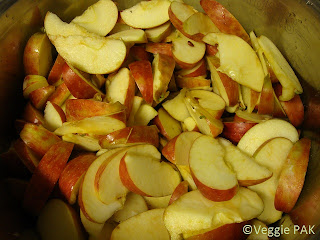 I weighed out 25 actual pounds of apples in order to be able to produce seven full quarts. I figured about three and a half to four pounds per quart, based on several "weight vs. number of quarts" calculations that I found online. I leaned towards the heavy side because I didn't want a partially filled quart jar at the end of this lengthy process. I added a quart of "no sugar added" apple juice (to avoid sticking) to the stock pot and began cooking. When the apples became soft, they were ready for being processed through the food mill. 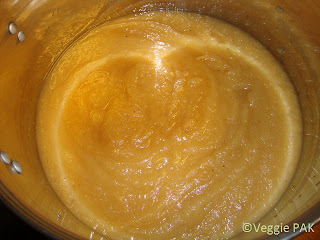 This is what 25 pounds of apples looks like that have been processed through a hand operated food mill. Actually, getting the apples to this point wasn't too bad.


Now for the tedious part which was to cook the applesauce and bring it to a boil without burning it. I had to stir it like this for two full hours to get it to a boil. Let me tell you, when applesauce is boiling, it is really hot when  it spatters onto your finger! 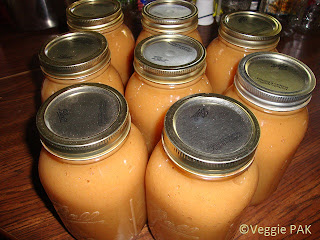 After all the cooking was completed, I ended up with 8 quarts of delicious cinnamon applesauce with no added sugar. 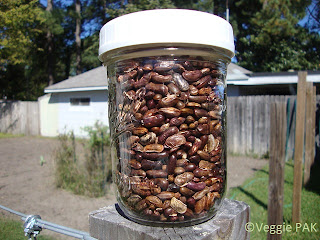 This is a pint jar filled with my Fortex green bean seeds that I harvested earlier this year. This is my first time saving those seeds, so it will be interesting to see how they germinate next year. 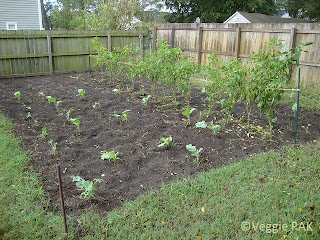 My collard plants in the west plot are growing very well. I've already picked from them twice this year. 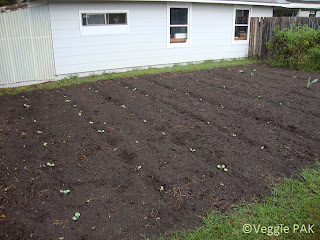 Last week I put in six rows of broccoli in my east plot, with an additional 28 plants to put into the west plot. I'm also planting several rows of buttercrunch lettuce at the far right end of the picture on the other side of the tomato plants. 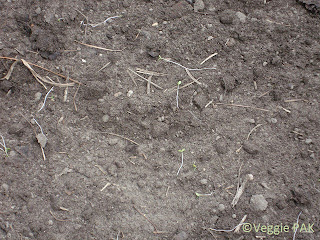 When I was planting the broccoli, being so close to the soil, I saw little weeds coming up pretty much all over. They were very tender and would come out if you just brushed your hand against them. Since that was the case I thought I would try to make some good time in the weeding process, so I took a wide rake and dragged the back of it over the paths and between the plants. The weeds rolled out with almost no effort other than pulling the weight of the rake over them. I wish all of the weeding went this easy!

That bit of gardening news brings this week's post to an end. I would like to thank all of the people that take their time to view my blog, and I hope you find it informative and thought provoking about gardening.

Have a wonderful week, and we'll see you next time!
Veggie PAK
Posted by Veggie PAK at 12:04 PM