How I Protect My Blueberries From Birds.


For the last two years I have been pondering what the best protection for my blueberries would be. In the past, I have draped bird netting over them, only to have the birds go underneath it to get the berries. I considered various forms of white PVC pipe with bird netting over it, but I couldn't decide on the style of framework because it seemed to me that the white pipe would glare out at you and be unsightly. Eventually they would deteriorate from UV damage as well.

This year, the solution came to me while I was picking beans. I had a surplus of galvanized field fencing that I had purchased this year for fabricating the rest of the tomato cages that I needed, and for putting up the cucumber fencing/trellis. The rigid construction of the field fencing was exactly what I needed all along. 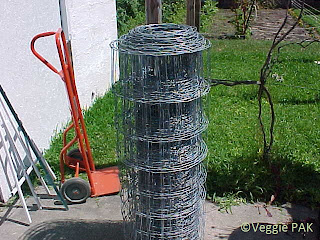 This was the remainder of the 330 foot long roll of field fencing that I had purchased a few weeks ago for $174, which equates to $0.53 per linear foot of fence. I thought it would be better to use the fence material than to have to keep storing it somewhere, so I did. I measured the largest three blueberry bushes that I have had for about four years now, and made my calculations so they would be protected from the birds with room to spare. 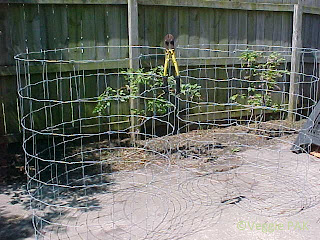 I measured the circumference that I would need to adequately enclose the bushes, and measured off that distance on the roll of field fencing and cut the fencing in the center of the next rectangle after the required length. That allowed me to use the raw end of each horizontal layer of fence strand to twist onto the adjoining end in order to complete the coil of fence material.

I bought a package of bird netting for $36. After cutting it I had two pieces 7 feet wide by 75 feet long. That broke down to a cost of $0.24 per linear foot. I needed bird netting 7 feet wide, and the piece in the package unfolded to a 12 inch wide rolled up flat strip that was 14 feet long. My son Jonathan helped me and we simply cut the rolled up strip across the middle of the length, and had two sections that were each 7 feet long. At that point we took a prepared coil of fence and put it on its side on a work table. We held the bird netting to the bottom section of the fence and tied it off with nylon string that had its ends singed so it wouldn't unravel. Then I took a piece of the nylon string that was long enough to reach past the top of the fence coil and interlaced it with the bird netting and the fence material openings all the way to the top of the fence roll and tied it off. We rolled the fencing slowly and applied the bird netting to it tieing it here and there, and overlapped it by six inches or so at the end to be sure of a complete bird seal. Then we interlaced another nylon string tieing that end of the netting down to the fencing. Since the netting is 84 inches high and the fence is 48 inches high, this left 36 inches of loose bird netting at the top that would be folded over and tied in some simple undetermined manner in order to keep the birds from gaining access at the top of the enclosure. 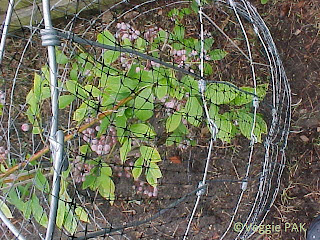 I had to use a heavy pair of sliplock pliers in order to bend the fence wires, especially the thicker top and bottom strands. After making U-shapes in the wires, I hooked them together and then squeezed down on them seperately to crimp them together. I did the top and bottom strands first, because they held the other strands in a somewhat close proximity to where the "U" had to be formed. Then I just repeated the process at each intersection of wire and it was done. 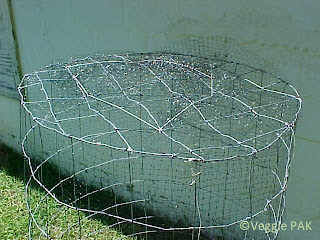 In order to provide support and make sure the birds couldn't get in through loose bird netting, I cut 4 foot lengths of fence and laid them across the top of the prepared coils. I took bolt cutters and cut the material into a circle slightly larger that the coil, then I formed the ends around the top course of wire and crimped them down so that it became a rigid unit of fence material. After this round piece was attached, I took the bird netting and brought it up and over it towards the center of the round piece of fence. I tried to simply gather the bird netting in the center of the round piece of fence and tie it closed like an old sack. That didn't appeal to me so I layed the bird netting down going from the edge in towards the center so it was basically all laying down flat on the top. Then I took the prepared nylon string and tied one end off while wrapped around the netting and the fence fabric. Then I simply interlaced it onto the round top in long sections, then tied that end off. 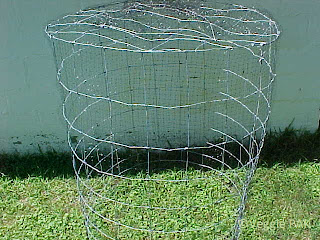 Here is a finished section of blueberry protector fence. They turned out very well! 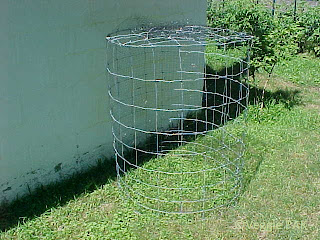 They look pretty good, if I do say so myself. This fence material will outlast me! 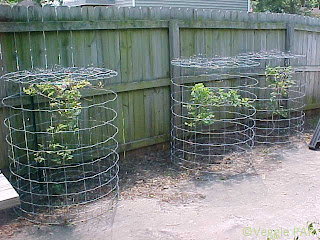 The bird protection looks nice when in place. The beauty of these units is that to pick the blueberries, you simply lift off a lightweight enclosure, pick the berries, then replace the enclosure! 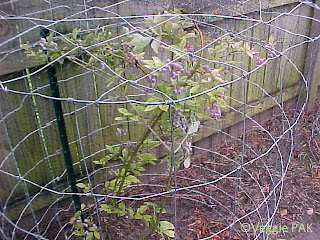 As you can see in the pics, even if the birds land on top of the protector, the blueberries are far enough away so they can't reach them. 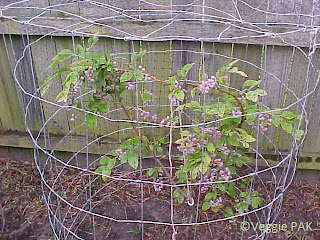 The side clearance is just right too. 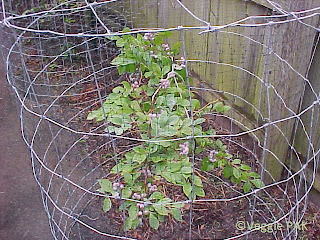 I'm very satisfied with these protectors. I think they'll do a fine job for years to come.

The breakdown for the cost of one of these units is as follows:

That completes my blueberry protection blog post. I hope this might give someone an idea on how they can protect their berries.

Have a great vegetable gardening day!
Veggie PAK
Posted by Veggie PAK at 9:49 AM