We have had a time already this year with the weather! It's like Mother Nature is trying to go back to the winters of years past, when the river would freeze and people drove their cars across to the other side! Hopefully, that's not the case. 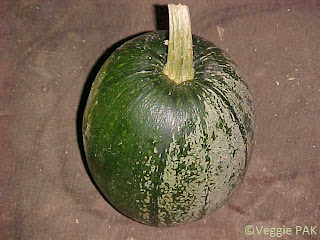 I was able to pick one three pound sugar pumpkin after the cold nights had killed the vines. It should ripen up nicely out in my garage. 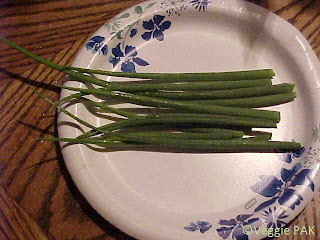 Only a small amount of scallions (1 ounce) had grown enough to be harvested while unprotected from the cold. They can be used in cooking or will be tasty in a salad. 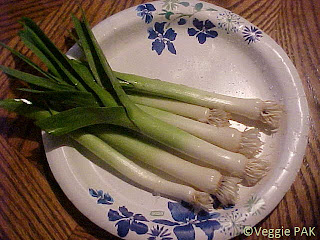 After pulling a few leeks that weighed 3/4 pound, there are still transplanted leeks "growing" in the garden. However, the seedlings from the seeds that I planted on August 26th, remain hardly as big in diameter as a ballpoint pen refill, and have been that way for, actually, months. Do any of you know about how long leeks take to grow to full size? Was August too late to plant leek seeds? We still have reasonably warm weather to the middle of October. I would have thought they would have grown to medium size by now. They won't be in my garden next year. 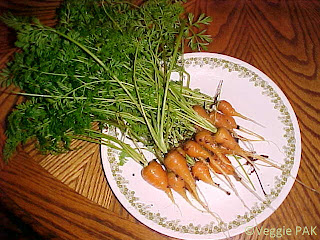 Carrots are stubby, but sweet! Not sure if I will try them again, as I have to consider the yield of productive crops. 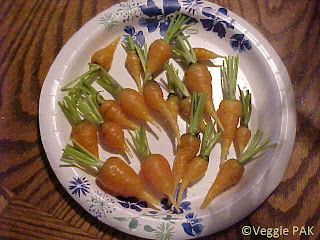 After washing and trimming, those carrots weighed in at 6 ounces. That's better than the last two years!

If the frost, snow and sustained cold weather wasn't enough, we got this the first thing this morning!
Brrr!
(It would seem that Blogger has upgraded itself to allow video posting.)
That's all for this week's harvest. I'm expecting some additional carrots by the end of the month since I only picked a few of the bigger ones for this harvest. Additionally, there will be Swiss chard, buttercrunch lettuce and collard greens that will be harvested for the last Harvest Monday of the year.
Everybody stay warm and we'll see you next time on Harvest Monday!
Thanks for visiting!
Veggie PAK
Posted by Veggie PAK at 12:11 PM