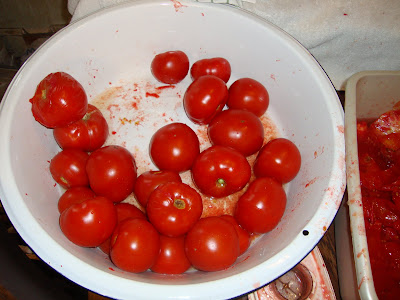 After picking 18 pounds of Brandywines and 13 pounds of Park's Whoppers in one day, I decided to make tomato sauce. Tomato sauce is good to have on hand any time of year, but it is especially good in the winter. (When it's cold outside and you're inside making wonderful Italian dishes with your canned tomatoes, you sure will be thankful for them.) Scalding the tomatoes for 2 or 3 minutes so the skin slips off is very important. If you don't do that, the skin just isn't coming off. You can use a strainer basket, or a slotted cooking spoon to retrieve the tomatoes from the hot water. My preference is a heavy-duty strainer basket. These are some tomatoes that had just been scalded, and they are cooling a bit before I remove the skin. When I do, the skin will slip right off. The bright red color is a nice contrast against the white pan. 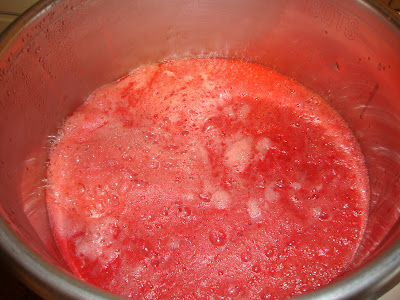 These are the tomatoes after they were peeled and cored, then run through a blender at chopping speed for about a minute. After all the tomatoes had been processed and poured into the 21 quart stock pot, I heated the mixture up for about 15 minutes before I began the next step. 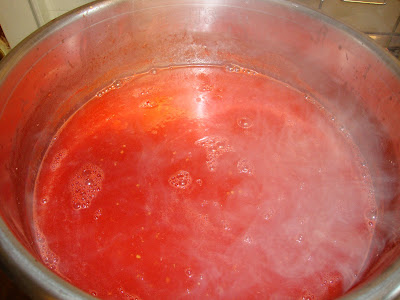 The next step was to drain the mixture through a stainless steel colander in order to remove most, but not all of the seeds. A few seeds in the sauce is okay. I prefer a stainless steel colander over a plastic one because the holes were smaller than the plastic versions. That way, I ensure a more thorough removal of excessive seeds. That was done, and the strained product was again put into the stock pot. You can see the change in consistency in the pictures, whereas the second picture is showing a more fluid product. To thicken the mixture, I cooked it for a little over an hour, stirring frequently to prevent sticking. After this is done, you can let the mixture sit for about 30 minutes, and then you can spoon out more excess water that accumulates at the top of the sauce, particularly around the edge of the pot. It's not hard to do because the sauce is thicker than the water, making it easier to spoon out. 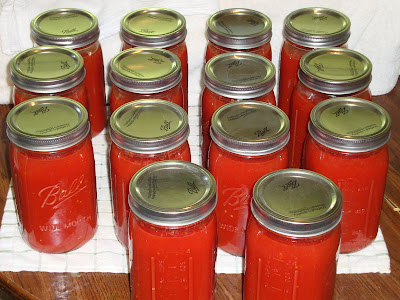 Here are the fruits of my labor. 14 quarts of tomato sauce from the 31 pounds of vine-ripened tomatoes that I had picked from my organic vegetable garden. It was a lot of work, but it was well worth it to me. I will surely be doing it again during this harvest period, as the tomatoes aren't scheduled for the last harvest until Labor Day Weekend!


Thanks for visiting my blog. I hope it serves as the deciding factor for another person to begin tending an organic vegetable garden, even if it's only one plant in a pot.