Getting Ready for the Fall Planting 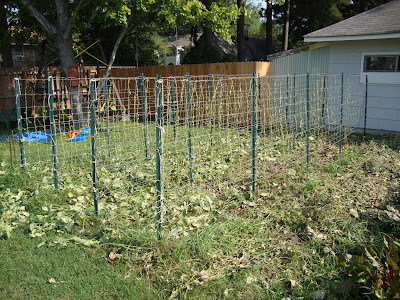 I went through my snap bean rows and pulled off almost all of the vines in order to prepare room for the new vines to grow onto the field fence material. It wasn't necessary to remove 100% of the vines because after the next crop, all the vegetation on the fence will be stripped clean and the fencing and posts will be taken down for winter storage. 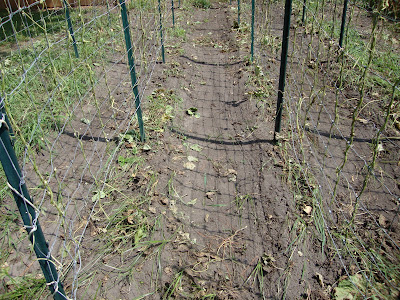 It is worthwhile noting the substantial absence of weeds between the former rows of snap beans after I raked away the pulled vines. I have read several times that if the sun doesn't get to the weed seeds, then they can't grow. It appears that this is true and is an excellent method of weed control. The last time I tilled between the bean rows was June 25th, and from that time to this, I haven't pulled a single weed from those rows. 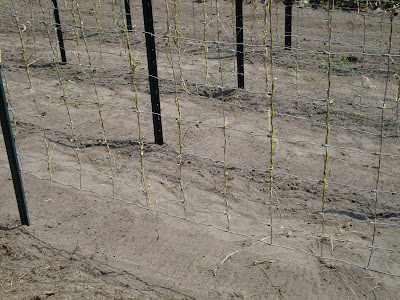 I have also read that when the soil is disturbed, you can bring dormant weed seeds to the top and then they will begin to grow. I chose to not risk that by not tilling between the rows for the beans. Instead, I used a hoe to level the soil underneath the fencing so I could plant my Fortex Snap Bean seeds, and that way, not disturb any dormant weed seed in the walkway between the rows. Hopefully, the snap beans will grow quickly onto the fencing material and will again shade the area between the rows so the weeds can't grow. After using a rake turned upside down to pull and push the soil over the snap bean seeds, the resulting soil appearance looks really nice. 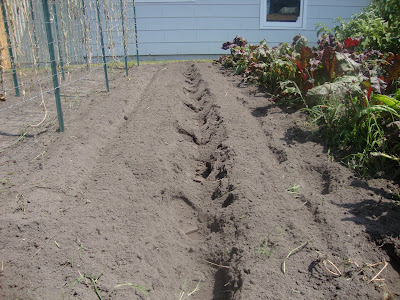 Since my butter beans were out in the sun, they had plenty of weeds, so I cleaned them out and tilled up the area thoroughly. An interesting point to bring up here is the topographic surface of the soil after tilling. I made about four passes with the tiller, and then one pass through the middle of it, making sure to keep my footprints within the furrow created by the wheels of the tiller. For those folks that prefer raised bed gardening, look at the picture closely. I have effectively created two raised beds by simply tilling the soil in the way that I did. I first noticed that last year and thought it was interesting that it could be such a time saver. I don't use that method of gardening at this time, but it looks like a great way to get the raised beds if that's the style of gardening that best suites your soil conditions. 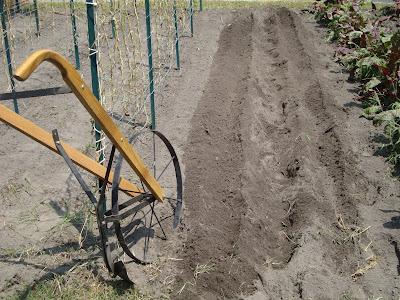 I had used my push plow to create two furrows for my butter bean seeds. Since I was just putting in two rows, I chose to not use my seeder, but just to do it by hand. Now, my aim isn't so good when it comes to dropping seeds into the correct spot in a furrow. So, I improvised. I took a piece of 1/2 inch PVC electrical conduit that I had and cut it to about 40 inches in length, then holding the top with my left hand I positioned the lower end in the center of the furrow, and with my right hand holding several seeds, I dropped the individual seed down the inside of the conduit. That gave the seed a perfect landing every time. It's interesting to note that when doing this, you can feel the seed rattle down the conduit and then feel the impact of the seed on the soil. That way, you know the seed was distributed correctly, just in case it gets covered by soil when moving the conduit to the next position. 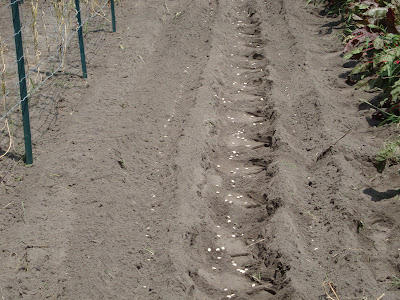 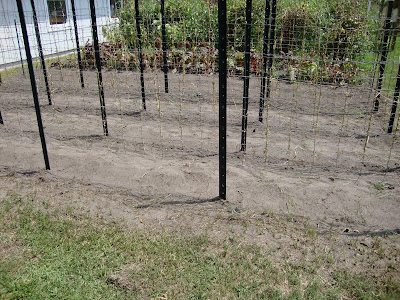 This is the view of the day's efforts. Four rows of snap beans planted, and one wide band of butter beans planted, with the Ruby Red Swiss Chard and my Brandywine tomatoes in the background. All that's left to do now is water it. 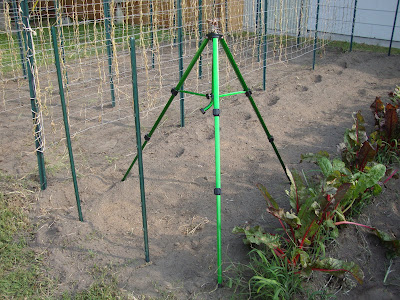 And here is the ticket for that! With plant height being a problem by blocking the water spray from typical sprinklers, Lowe's had the solution and my wife bought me one for my birthday! Yay! For less than $40 you can get one of these telescoping sprinklers with adjustable spray pattern. It can water up to 80 feet in diameter, and the hose connection is straight down from the sprinkler head. You can see the connection point several inches under the sprinkler head. It is designed to curve outwards to accommodate the natural lay of the garden hose. This low center of gravity keeps it from being top heavy, and to make it sit solidly wherever you place it. The adjustable tripod legs conform to virtually any soil surface. 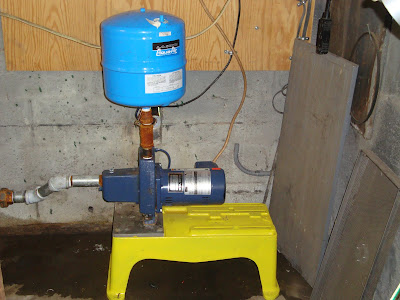 This is the well system that I installed to accommodate watering my organic vegetable garden. It works better than what I had hoped for. Notice the nice looking yellow base that the pump sits on. That is a solid cast iron base for a large York Air Conditioning Compressor that a neighbor had given to me. It was too massive for me to lift onto a workbench by myself, so I had to have help. After dismantling and recycling the compressor, my son Jonathan took a pneumatic wire brush to the base and cleaned it all up, including top, bottom, threaded holes, and adjustable mounting bolt head slots. After blowing it off with compressed air while wearing safety glasses, we painted it John Deere Yellow. I'm not sure of the age of the base, but with the decorative curvature of the edges, you know it has some age on it. They don't make them like that anymore.

Well, that's all for now. I hope everyone has a wonderful gardening day!